A provision contained in an underwriting agreement that gives the underwriter the right to sell investors more shares than originally planned by the issuer. This would normally be done if the demand for a security issue proves higher than expected. Legally referred to as an over-allotment option. 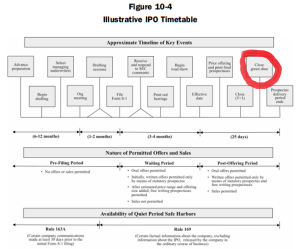 A greenshoe option can provide additional price stability to a security issue because the underwriter has the ability to increase supply and smooth out price fluctuations if demand surges.

Greenshoe options typically allow underwriters to sell up to 15% more shares than the original number set by the issuer, if demand conditions warrant such action. However, some issuers prefer not to include greenshoe options in their underwriting agreements under certain circumstances, such as if the issuer wants to fund a specific project with a fixed amount of cost and does not want more capital than it originally sought.

The term is derived from the fact that the Green Shoe Company was the first to issue this type of option.

A greenshoe option (sometimes green shoe, but must[1] legally be called an “over-allotment option” in a prospectus) allows underwriters to short sell shares in a registered securities offering at the offering price. The greenshoe can vary in size and is customarily not more than 15% of the original number of shares offered.

The greenshoe option is popular because it is one of few SEC-permitted, risk-free means for an underwriter to stabilize the price of a new issue post-pricing. Issuers will sometimes not include a greenshoe option in a transaction when they have a specific objective for the proceeds of the offering and wish to avoid the possibility of raising more money than planned. The term comes from the first company, Green Shoe Manufacturing (now called Stride Rite Corporation),[2] to permit underwriters to use this practice in an offering.